“Belize Is Calling”, by one of our Residents

“I’ll tell you something else about Belize,” said Fr. Smalls to the congregation gathered at Mater Dolorosa Catholic Church in Independence, Louisiana. With a sly grin he added, “Sometimes we eat monkeys.”

More than a few children made ‘yuck’ faces in response.

Looking back on my introduction to Belize, I’m pretty sure Fr. Smalls was engaging in hyperbole. Making the place seem exotically primitive probably boosted contributions. He was in Louisiana on a mission trip from his church in Orange Walk Town. Honestly, this wasn’t the first time I had heard of Belize. In graduate school I knew a professor, a diving enthusiast who spent most breaks out on Belize’s barrier reef. But that was a deeply buried memory and if not for Fr. Smalls, it likely would have remained so.

It must have been around 2012, a time when there were probably still more monkeys than houses at Carmelita Gardens.

Fr. Smalls was an effective advocate for his little parish in Orange Walk. He inspired my wife, Rhonda, to embark on an annual charity drive at Mater Dolorosa, ‘backpacks for Belize.’ Late in the summer the ‘backpacks’ gang would collect funds to buy backpacks, pencils, notebooks, and other school supplies for the school at Fr. Smalls’ parish. We’d pack up all the stuff in my old Ford Bronco II and drop it off at an overseas delivery service in New Orleans. A month or so later, we’d get handwritten thank you notes from the students and pictures of them holding their backpacks.

The students at the La Immaculata Primary School proved to be more than just cute, grateful kids. They were slightly devious little salesmen. Along with the thank you notes and pictures, they also sent tourist brochures and other travel/retirement information about Belize. As the years passed and retirement increasingly became a topic of household conversation, Belizean propaganda had its insidious effect. 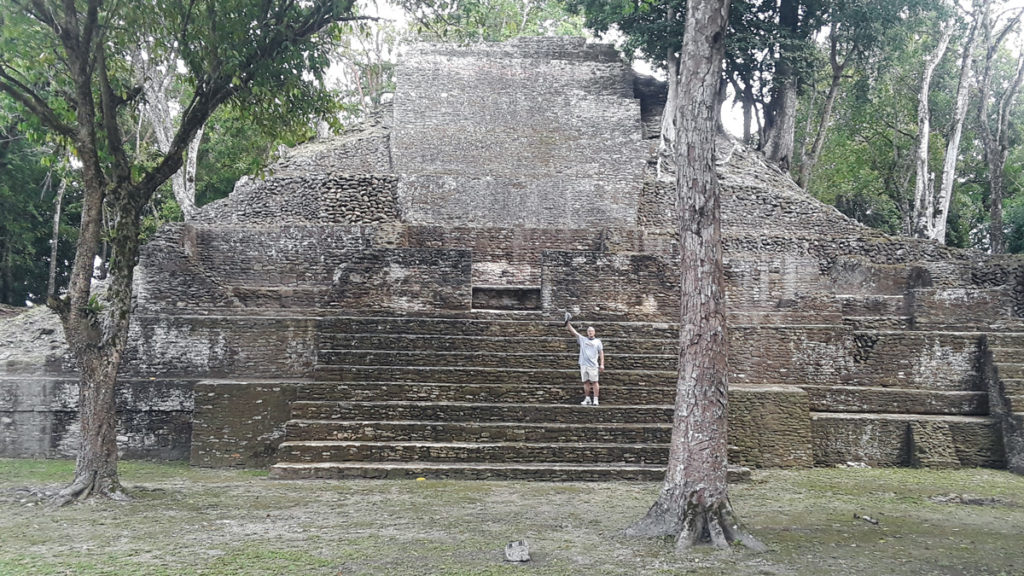 “Maybe we could buy a little island off the coast; have a garden and catch fish.” Rhonda proposed.

“I’m not sure that’s realistic,” I replied.

Rhonda always had a thing about going off-grid, getting away, leaving the modern madness behind. But a whole island was a bit fanciful.

Then I got a call one day while eating lunch in my office.

“Hey, I found this place called Carmelita Gardens in Belize,” said Rhonda, “You should check it out.”

We did. But we investigated some other options in Belize as well. Carmelita Gardens checked all the right boxes. First, it was a sustainable community – off-grid. Houses were solar-powered, rainwater was captured and recycled, and there was room enough for your own garden (Rhonda loves a healthy garden). Going off-grid was either not feasible or offered only as a supplement at other developments. You’d still get a utility bill each month. 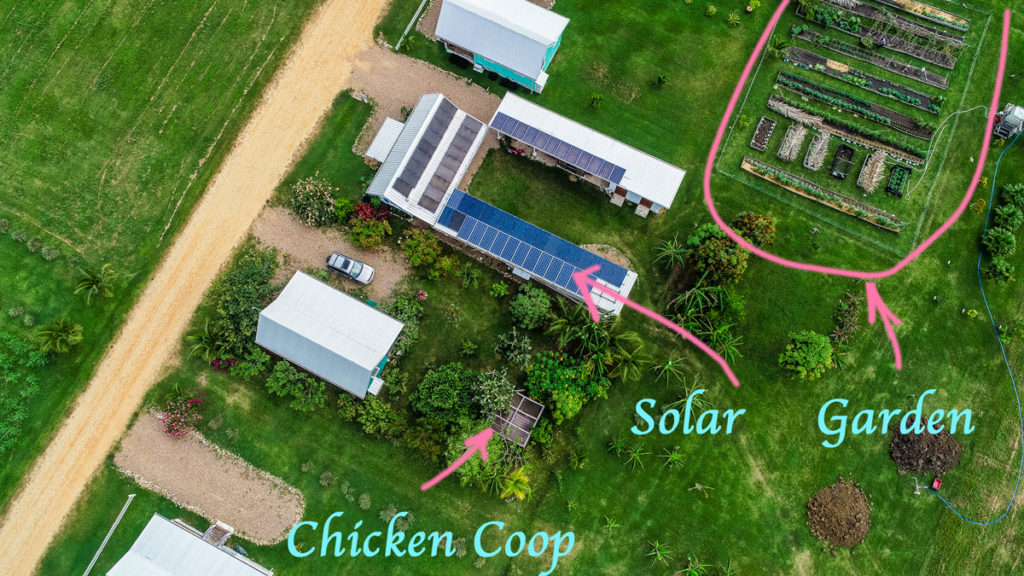 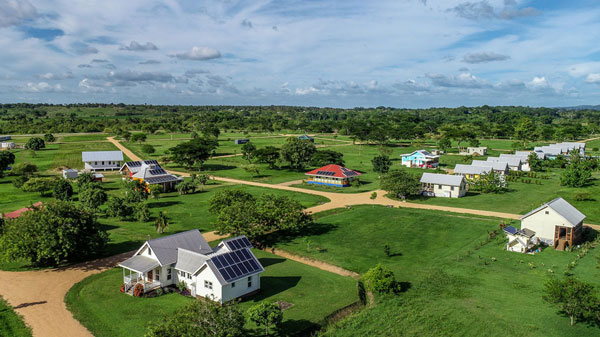 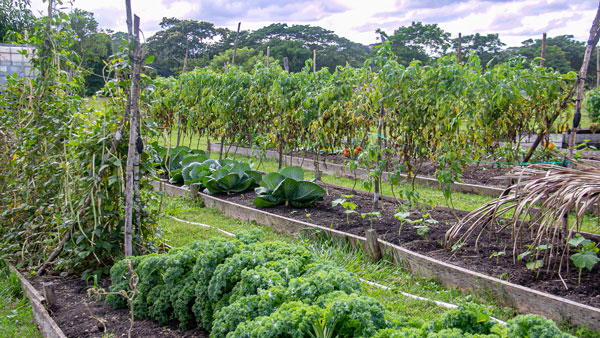 Second, Carmelita Gardens was not a walled-off, exclusive expat enclave. We wanted to live in Belize, not in a hermitically sealed American ‘green zone’ that just happened to be in a Central American country. This place actively fostered integration with the neighboring villages and towns. Finally, Carmelita Gardens was affordable. We found some very nice developments along the coast, but most were rather pricey. It’s not price alone that can be off-putting. It’s the idea that the developers are exclusively targeting a certain affluent demographic. That notion has never been to our tastes. None of that at Carmelita Gardens. There’s something real and really nice about a community where a variety of folks from different backgrounds all call it home. 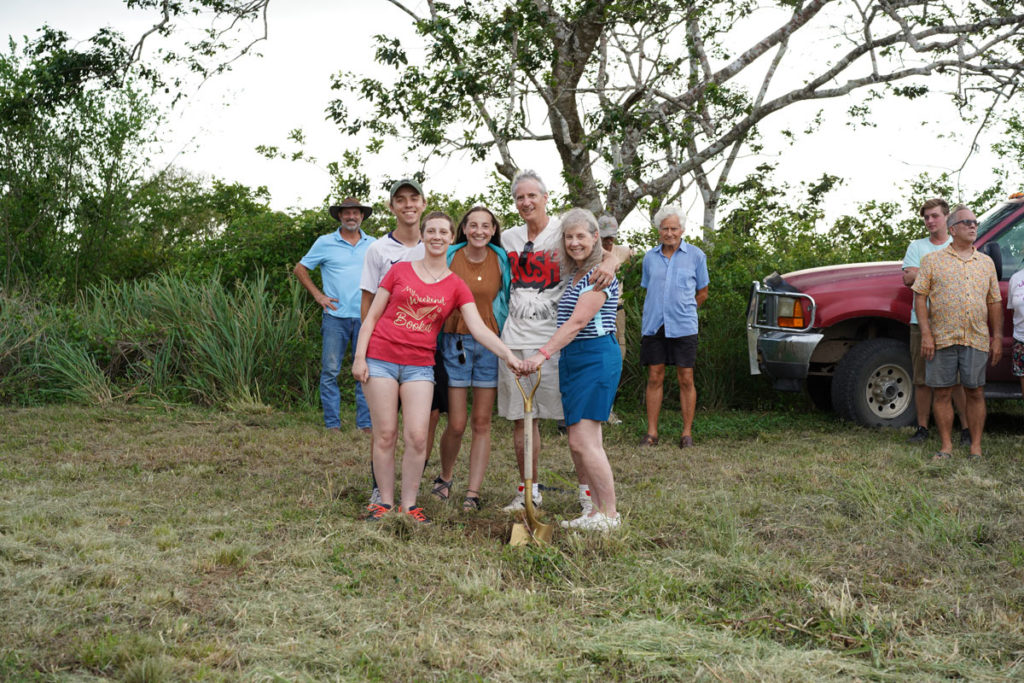 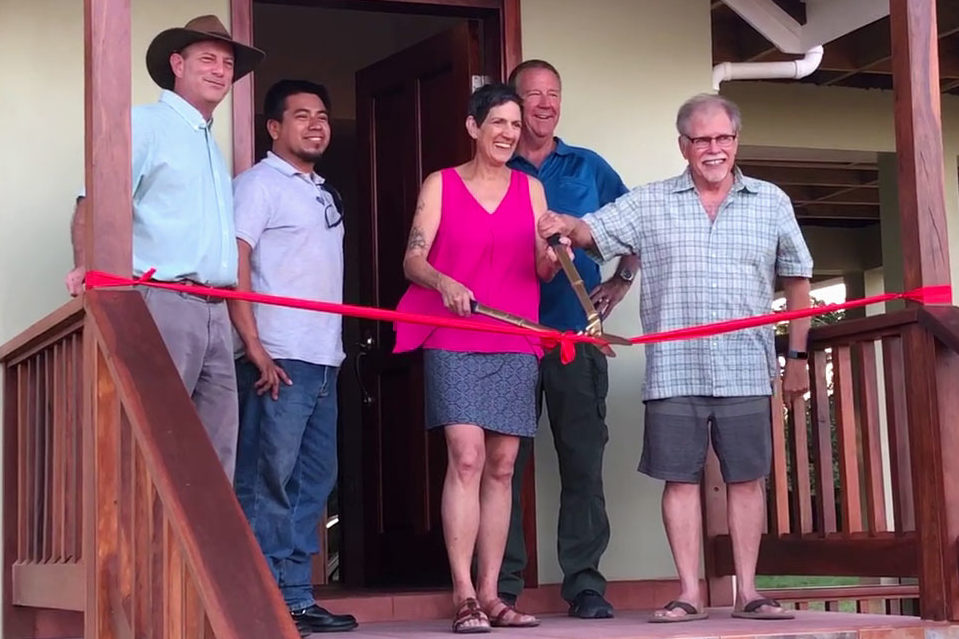 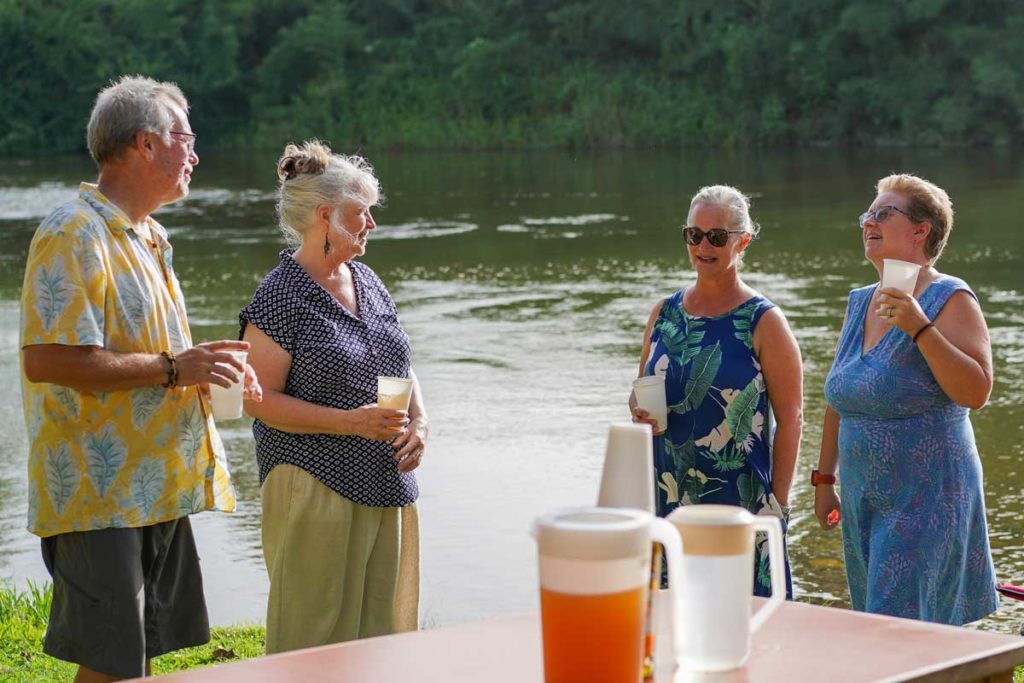 With all these positives, only one thing left – a first-hand look. A few months later, we were in Belize.

Things did not go swimmingly.

I was supposed to turn onto Iguana Creek Road from the Western Highway. Street signs are a luxury in Belize especially outside of urban areas. Never found it (there’s a roundabout there now, so you can’t miss it, but not back then). I got so frustrated, I stopped and asked some locals if I was still on the Western Highway. The bemused looks they cast about were vintage John McEnroe – “you can’t be serious!”

Instead, we found Bullet Tree Road out of San Ignacio…okay, back on track. That was until the pavement ended and the ‘road’ became a rutted mess of mud and stone (it was the rainy season). Suddenly, I regretted not buying the extra insurance on the rental car. Locals flew by me in their old pickups as if I was some bewildered tourist (well…actually, I was). Despite it all, we got there, a bit late but no damage.

Heavy rains had partially flooded the lot we were interested in. Phil assured us that once they had the drainage system in place, this wouldn’t be a problem (it is now and it’s not, but at the time, who knows?). And then, the internet went down.

Enough things had gone sideways that by the time Phil extended his hand and proclaimed, “Welcome to Carmelita Gardens,” I smiled but pull back – “I think Rhonda and I need to talk about this some more over lunch.”

Phil recommended the Guava Limb, and we had every intention of going there. But as we walked and talked down Burns Avenue not quite finding the place, a friendly Belizean man who had seen us looking at signs and changing directions one or two times, approached.

“A place to eat? Yes?” He said with a big smile. “This is very good. You should eat here,” his arms guiding us to the entrance. Maybe he worked there or maybe his family owned it. Maybe he just liked the place, who knows? Anyway, we ate there. Good food and it had a nice view overlooking a small park and the soccer stadium.

As I write this, our house is under construction on lot 191 along the river, so you know how the story ends. 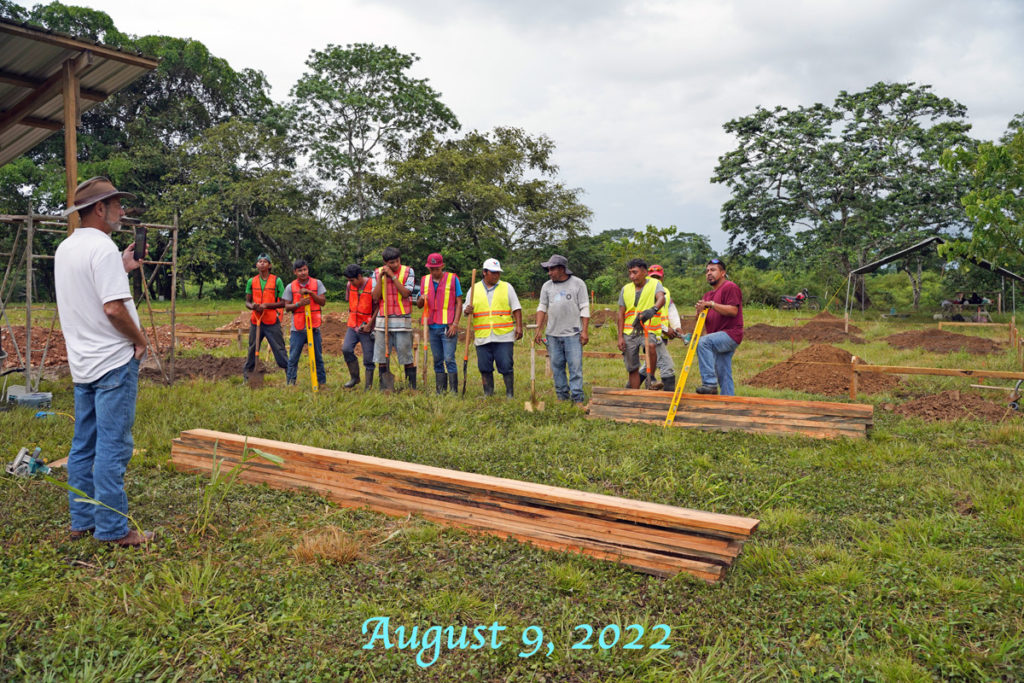 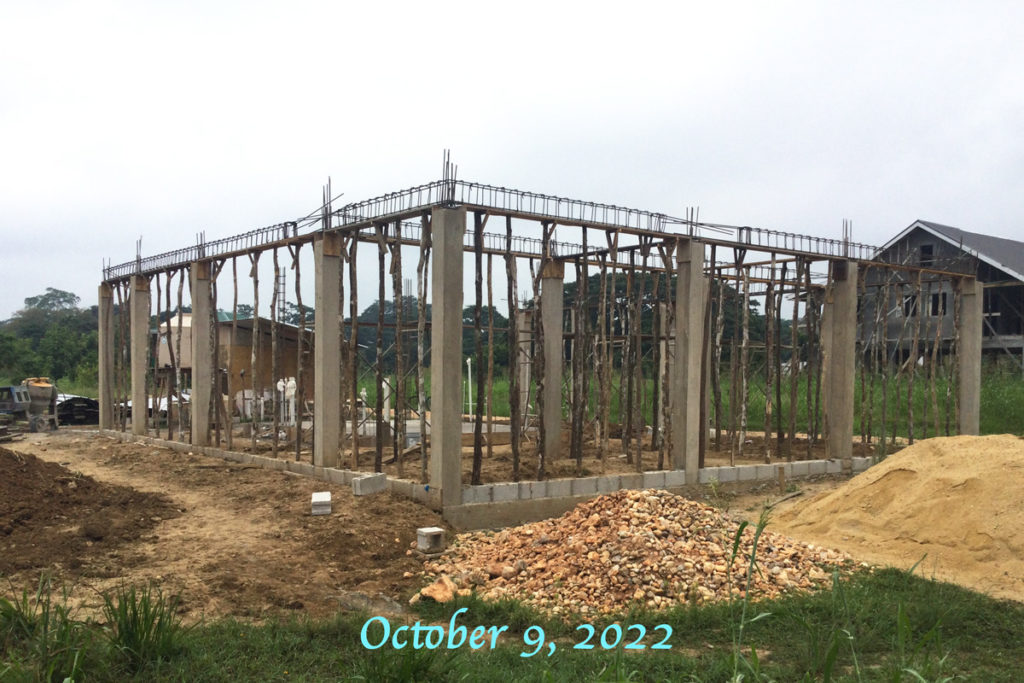 Did you ever see George Clooney in the movie “Men Who Stare at Goats?” Sometimes the universe sends you a message. Belize seems to have been calling to us for a decade or more. Never in those quiet but persistent beckonings did it claim perfection. Charm requires some imperfection. But the place is so beautiful and the people so friendly, and life is short – charm prevails.

Phil tells us the house should be done by April. Can’t wait.